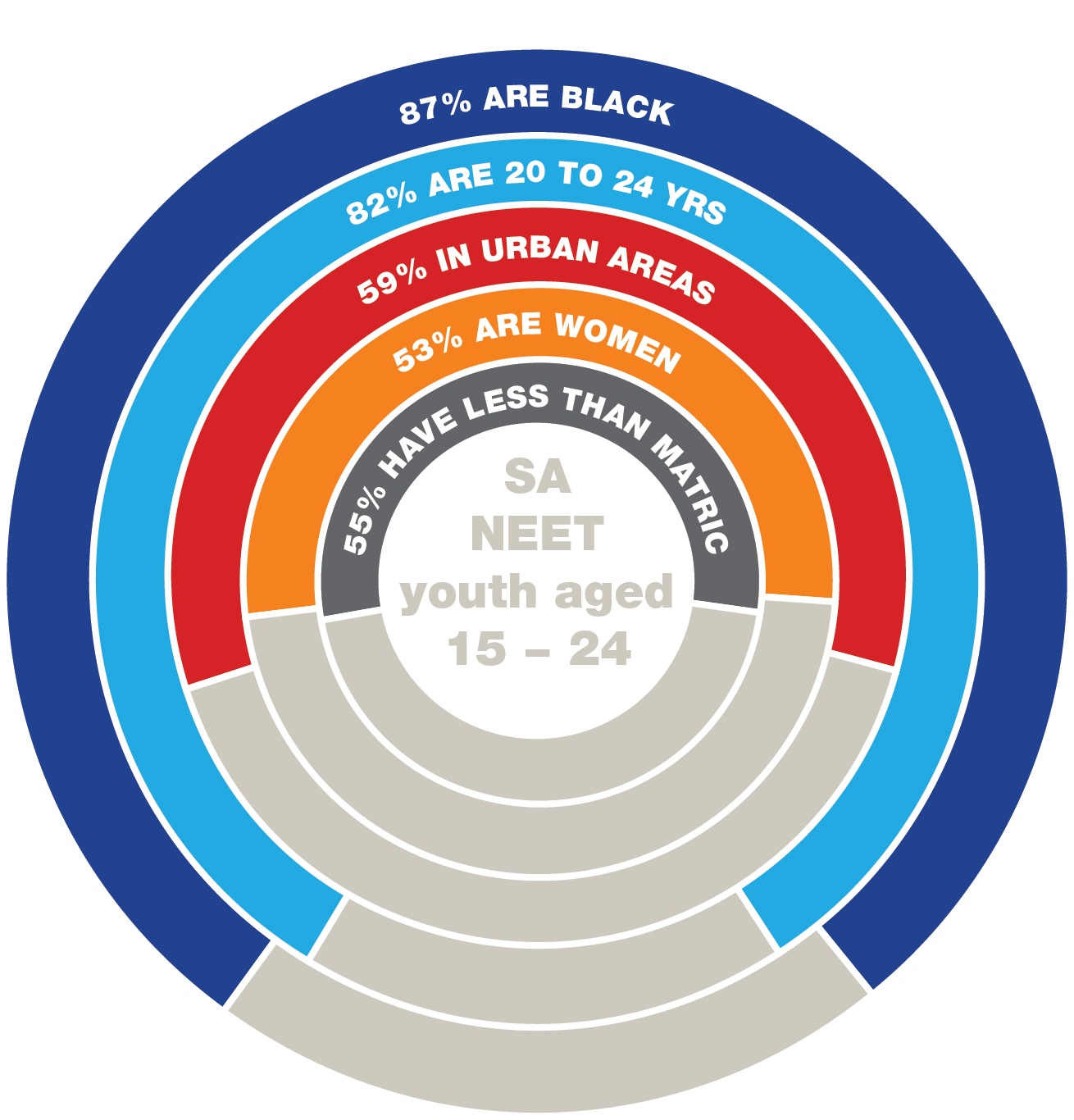 A critical step in the Basic Package of Support (BPS) research process has been the analysis of data that provide a more nuanced understanding of South Africa’s young people who are not in employment, education or training (NEET). This helped to define the target group for a BPS and, in turn, assisted the identification of the most appropriate components for the proposed programme.

The data analysis shows that South Africa’s NEET youth population is a heterogeneous group that is faced with multiple, intertwined, individual and household-level challenges.

This workstream of the project provided a mostly descriptive snapshot of South Africa’s NEET cohort aged 15 to 29, based on second quarter data of the 2019 Quarterly Labour Force Survey and complemented by the 2017 General Household Survey (GHS) for household-level data.

Due to differing characteristics found in the 25 – 29-year age group, the research team settled on the 15 to 24-year-old NEET youth as the target group for a BPS. This helped to limit the scope and to identify connection points with these young people as they transition from adolescence to young adulthood, including the possibility to create “flags” when they exit the system (e.g., dropping out or finishing school or other educational opportunities could activate outreach by the BPS programme). 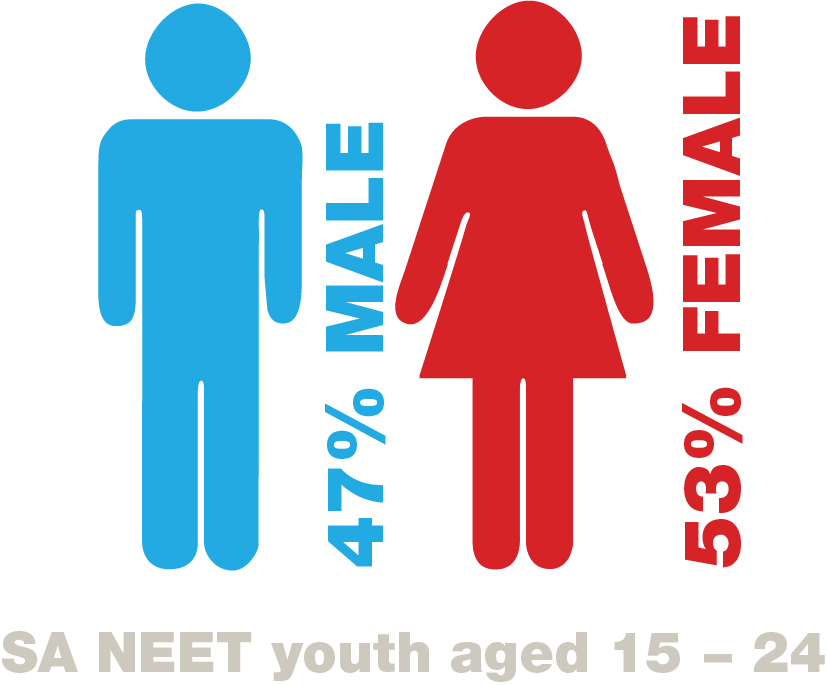 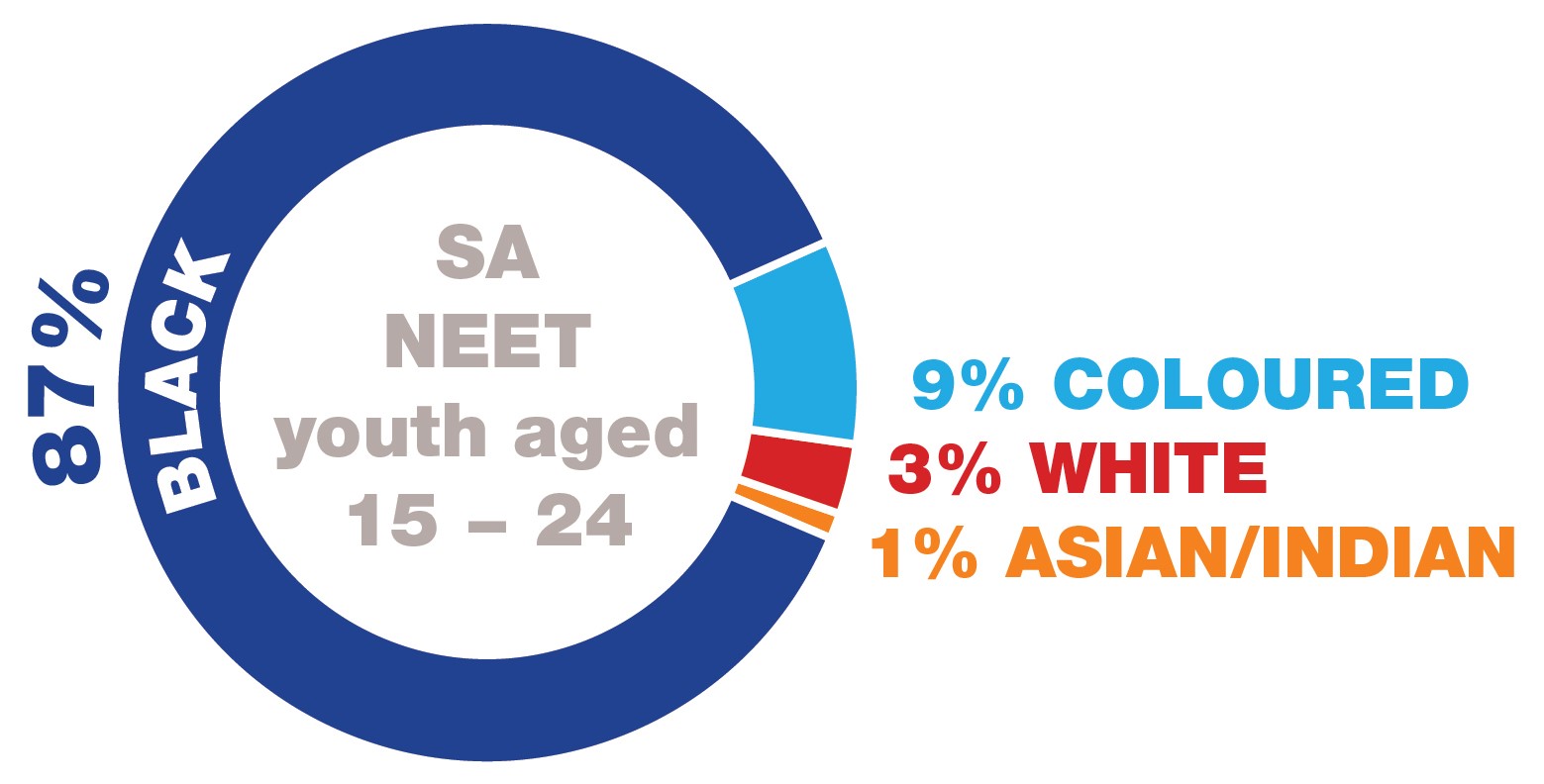 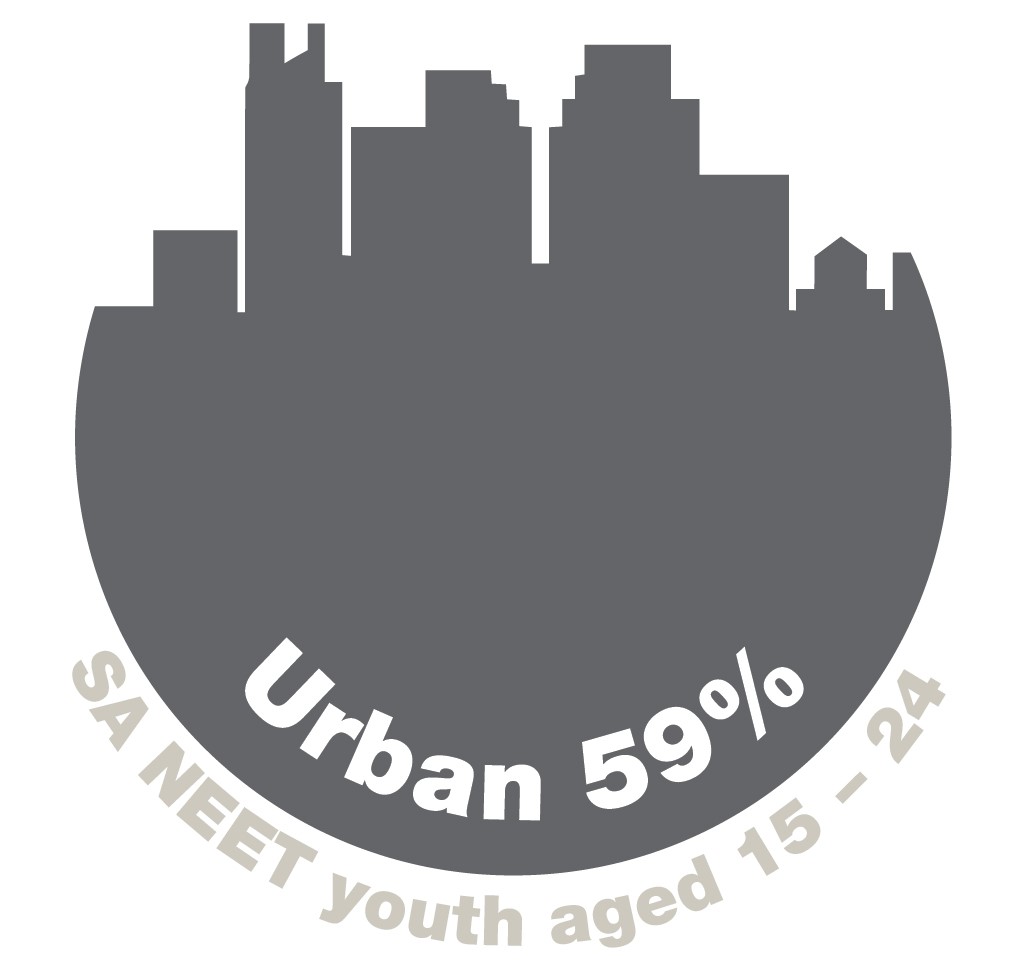 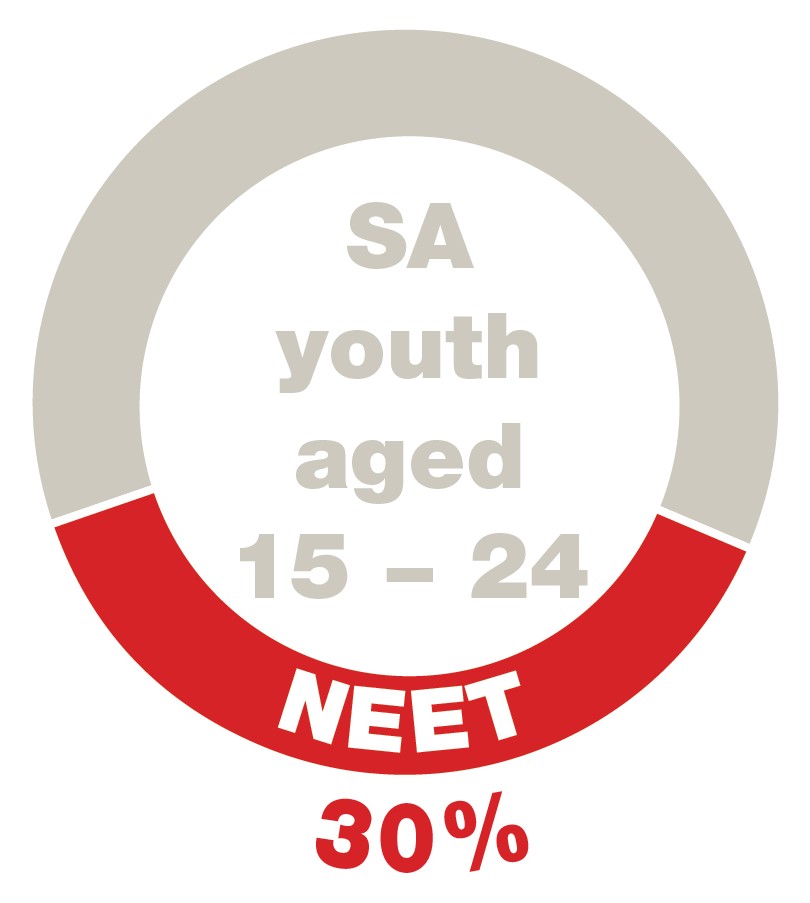 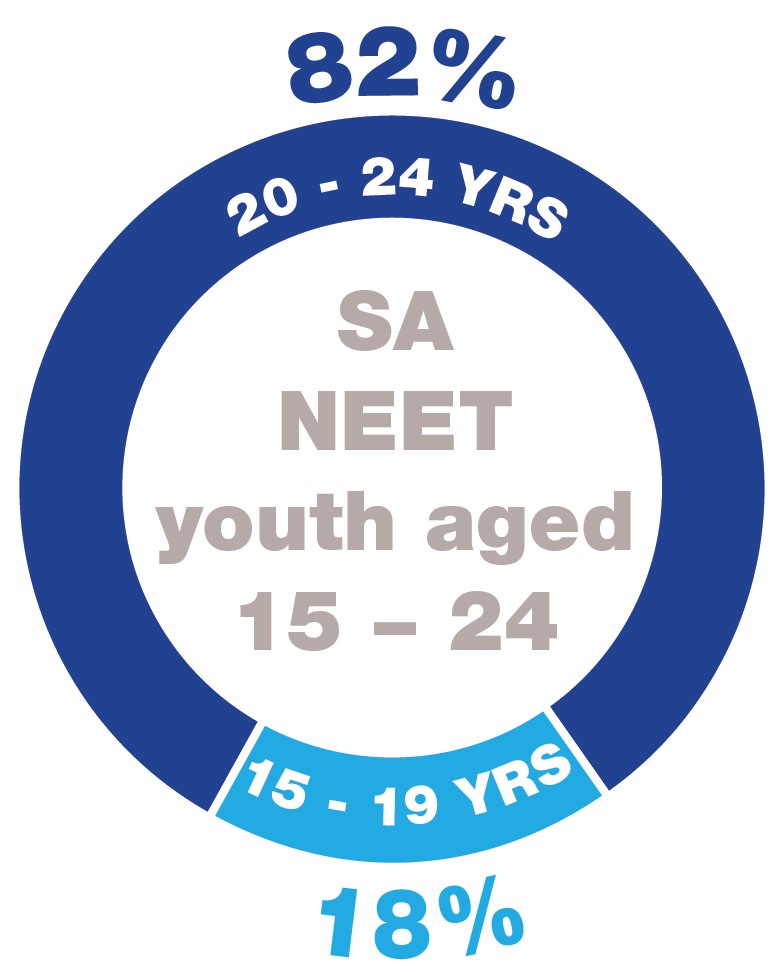 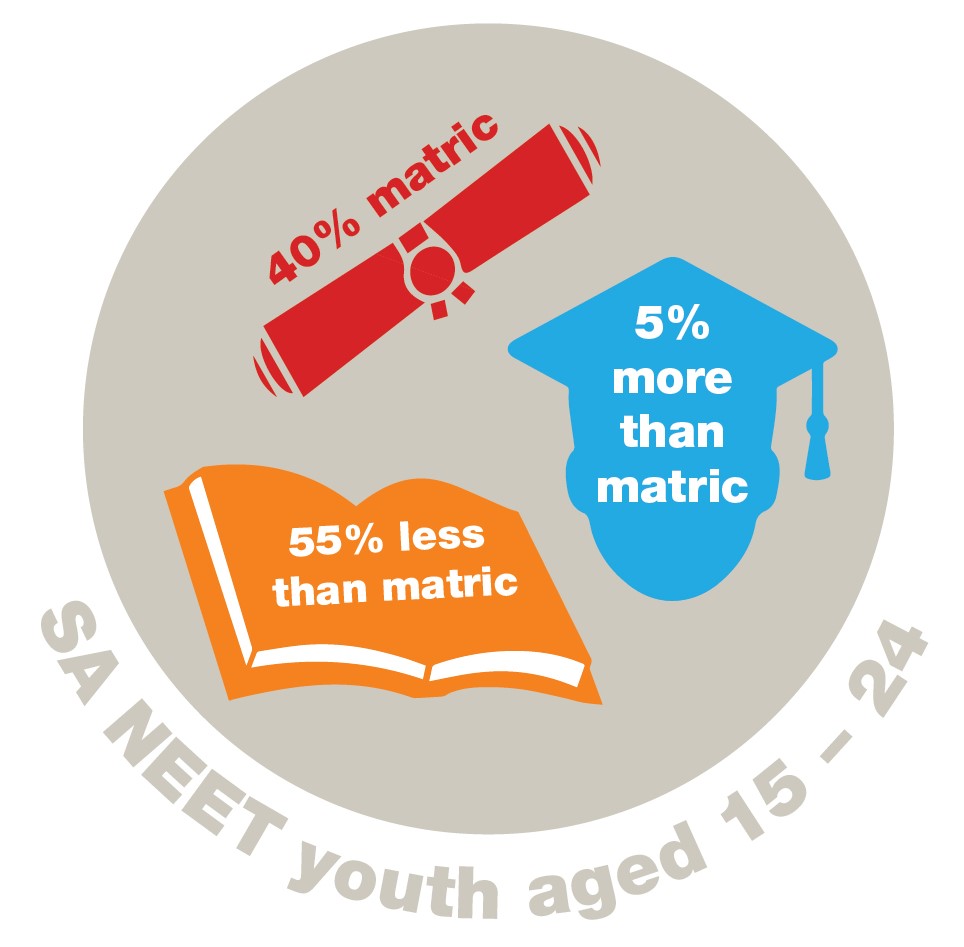 One in three young persons aged 15 – 24 years in South Africa are NEET. They consist mainly of slightly older youth (20 – 24 years old), and the majority of NEET youth in the country have only a matric certificate or less. 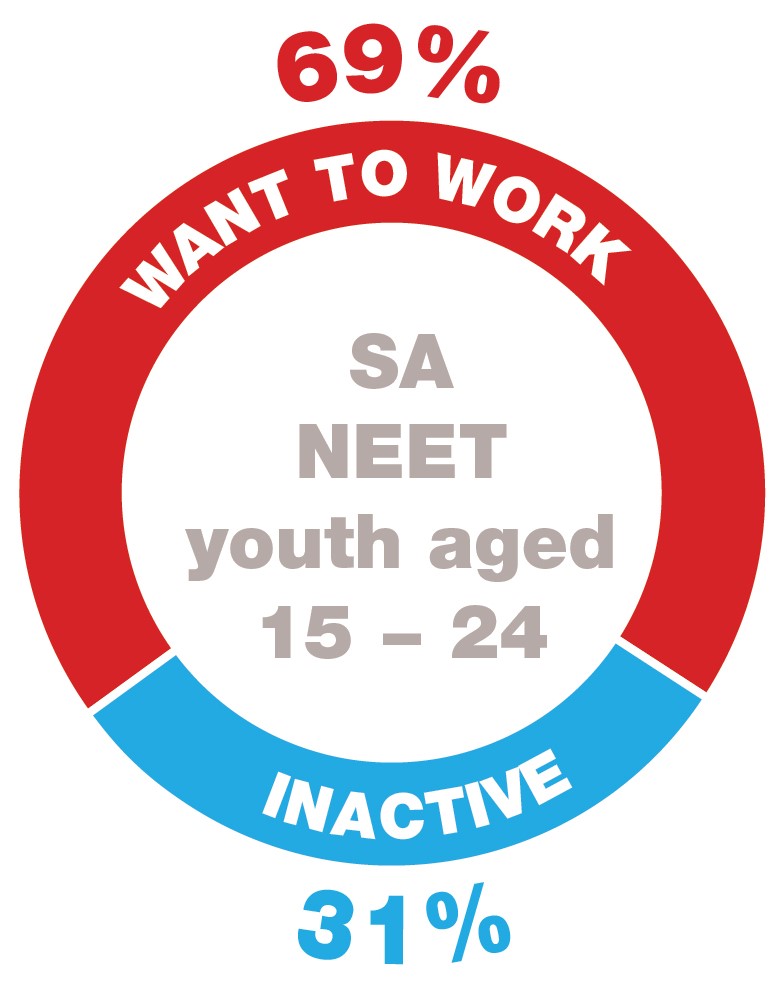 The majority of these young NEETs are unemployed (searching or discouraged) and they have less than, or only, a matric or matric equivalent. The data show that most of the unemployed youth want to work: 48% in this age group are seeking work, while another 21% indicate that they want to work but have become discouraged and have stopped looking.

Most (44%) of the NEET youth who want to work (i.e., ‘engaged’ in the labour market) are long-term unemployed: they have been searching for work for more than a year. This indicates the risk of scarring from long-term exclusion from work opportunities while wanting to work and underpins the urgency of finding ways to support these young people in their search for (re)connection. 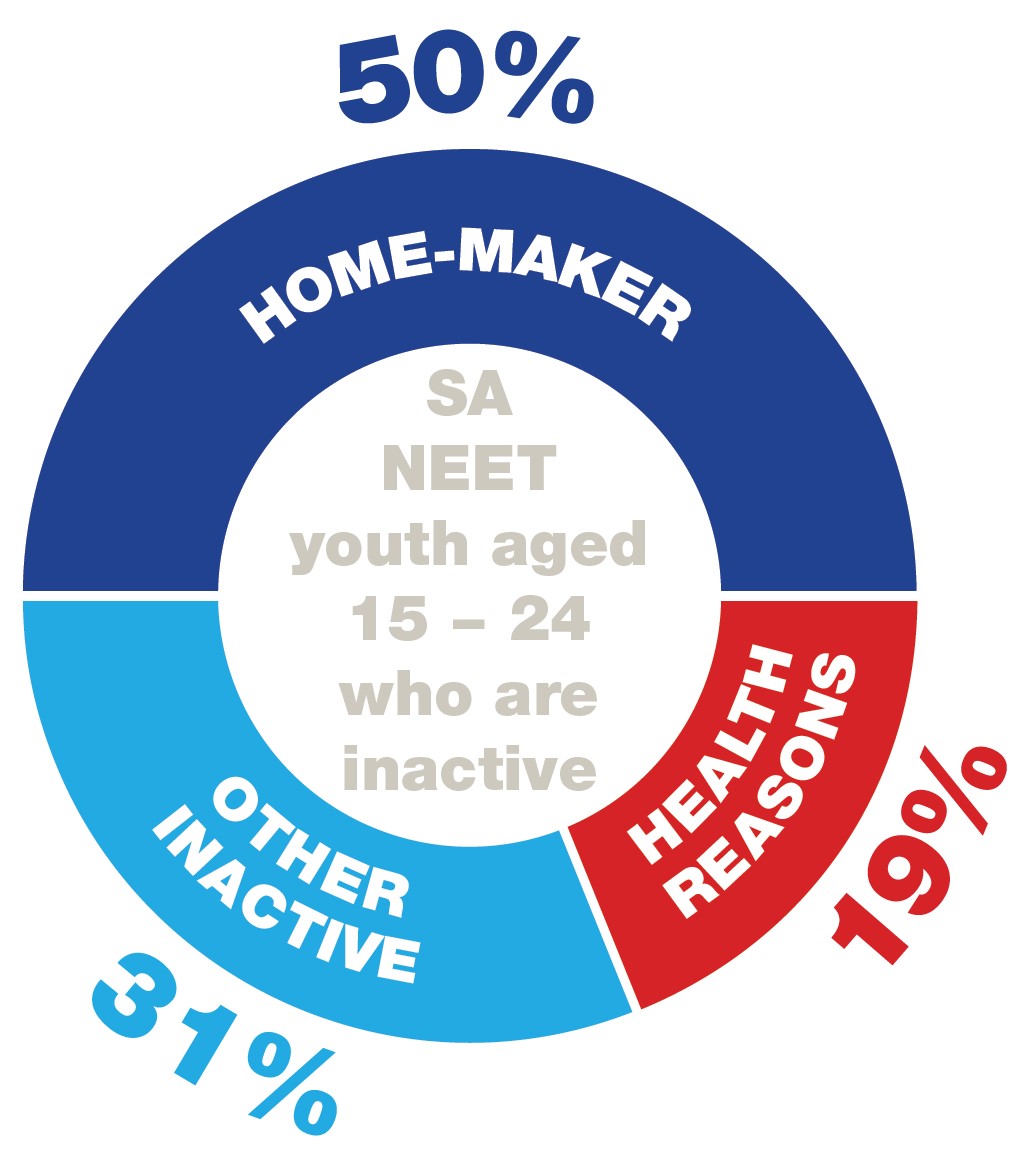 Of the 31% who are inactive in the labour market (not considering working), 50% cited home-maker responsibilities.

Of significance is that most (63%) of the inactive young people are female. 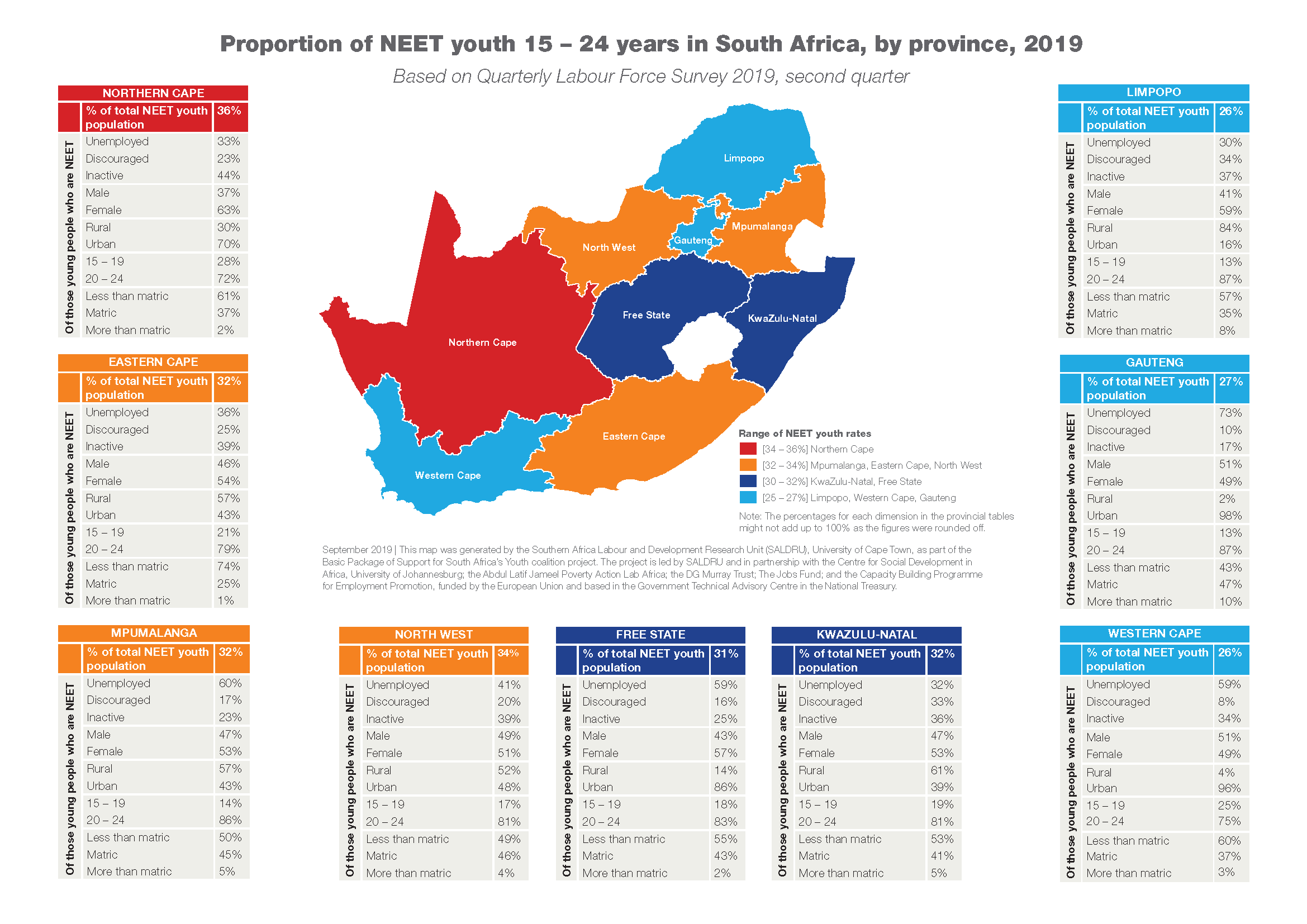 Implications of the findings

A multivariate analysis of correlates of being NEET among black youth confirmed that individual variables like age, gender and education are key factors associated with the probability of being NEET among this group. Ensuring that young people reach higher levels of (quality) education then seems pertinent in the design of an intervention that would support them onto pathways to more sustainable livelihoods.

Living in households with a higher income and with an employed person significantly reduces both young men’s and women’s probability of being NEET. This suggests the importance of looking for alternative ways to provide the financial, social and cultural capital that would otherwise be provided by employed people in their households.

The gender dimension that stands out in both the descriptive and multivariate regression analysis points at the double burden of care and poverty on young women and requires attention in the design of an intervention that aims to avoid “disconnection” among youth.

Interventions that increase motivation and encouragement to counter the scarring effect of long-term unemployment and (unsuccessful) job search, including mental health services, are another requirement for the BPS that was foregrounded by the data analyses, as is the need for diversified approaches across provinces, based on the profile of NEET young people, available services and labour market context.

The provincial differences in the distribution and profile of NEET youth are important for policy interventions aimed at reconnecting youth to education, training or the labour market in the various provinces.

Leave No Youth Behind: A Basic Package of Support for Young People in South Africa
29th Jan 2019

Who are the young people that the BPS is designed for?
19th Sep 2019

Supporting youth during and beyond COVID-19
28th Jun 2020