In most Sub-Saharan African (SSA) countries, the spatial dimension of inequality (i.e. across the regions of a country) is one of the key components of national inequality. In addition, regional disparities in SSA are often largely associated with pre-existing social divisions such as religion and ethnicity leading to an increase in ethnic conflicts. Despite this, there is limited work which analyses the spatial dimension of inequality in SSA countries. This is due to concerns over data and especially the lack of comparable data for measuring wellbeing over time and across each country at sub-regional levels. Household surveys which are the basis of estimates of income poverty and inequity are not regularly available at sub-regional levels and are often plagued by issues of comparability. For these reasons, recent studies use satellite night-time light data to measure regional income inequality trends in SSA.

SALDRU researchers are working on an African Centre of Excellence for Inequalities Research (ACEIR) project aiming to examine patterns of spatial and national inequalities in SSA using comparable data from the Demographic and Health Surveys (DHSs). Two indicators are used to measure the welfare of households. First, detailed information on living standard indicators are used to calculate asset indices using data from 24 countries that have comparable data in recent years. The living standard indicators include ownership of durable assets (TV, radio, refrigerator, car, phone), basic services and dwelling conditions (access to water, sanitation, electricity, type of floor material, type of fuel used for cooking), education (maximum years of schooling in a household), and indicators of land and livestock ownership.

The inequality estimates based on these asset indices are used to provide contemporary asset inequality estimates in SSA. However, comparable data on all of the living standard indicators used to construct the asset indices is available only in recent DHS surveys. For this reason, data on access to basic services is used as a second indicator to proxy for household welfare in order to compare inequality over time. For our purposes, data from 36 countries that have data for at least two periods between 1995 and 2018 is used. Access to basic services is measured based on an index calculated using indicators such as access to water, sanitation, electricity, a telephone and education. Inequalities in access to basic services and education are indicators of inequality of opportunity, given that access to these services largely depends on public investments like electrification, cell phone services, and the building of schools and sewerage systems. Thus, it is also important to examine these inequalities.

Our results indicate high spatial and national asset inequality estimates in SSA, with significant variation across countries. In terms of spatial inequality, the Gini coefficient was relatively higher in Mozambique (0.40), followed by Ethiopia (0.38), Kenya (0.32) and Democratic Republic of the Congo (0.32), while the figure was relatively lower in Burundi (0.14), Burkina Faso (0.16) and Comoros (0.18). National asset inequality was the highest in Mozambique (0.56), followed by Zambia (0.55) and Zimbabwe (0.53), while the figure was relatively low in Burkina Faso (0.35) and Burundi (0.36). The findings show that countries with relatively higher spatial disparities also had higher national inequalities. Decomposing the overall inequality into between and within region components indicates that the between component accounts for a large proportion of national inequality in most countries, with the figure ranging between 35 percent to 40 percent in 9 of the 24 countries considered in this analysis.

This suggests that reducing spatial inequality can make a significant contribution to the reduction of overall inequality in these countries. 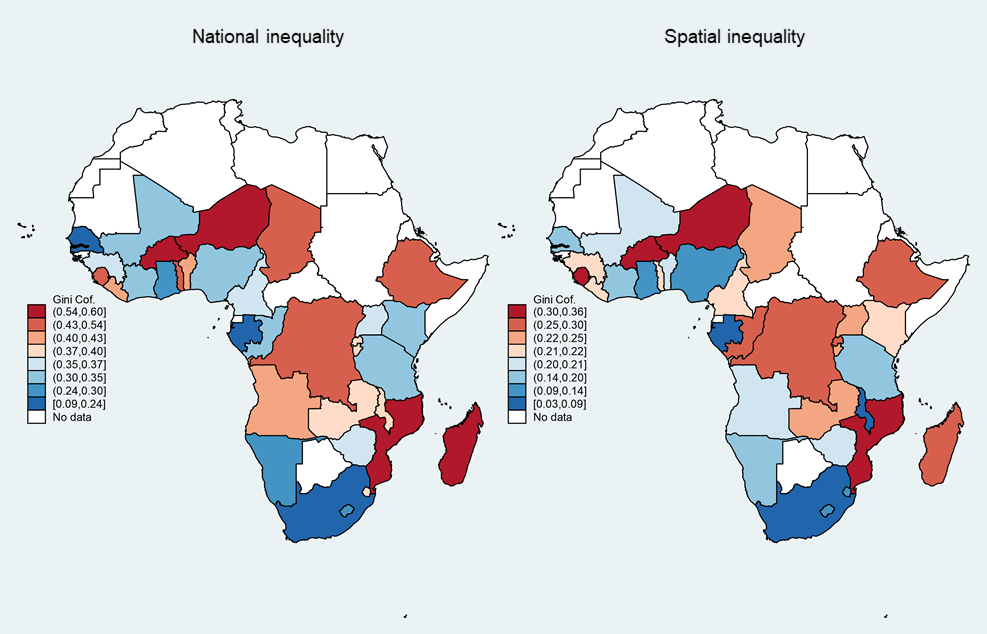 It is difficult to compare changes in inequality measures across countries, given that the timing and frequency of surveys vary by country. For this reason, changes in inequality over time are compared on the basis of data from 20 countries that conducted at least one survey after 2010 and one survey before, with at least 10 years of a gap between the relevant surveys. Our results indicate that the spatial Gini coefficient decreased by more than 50 percent in Guinea, Comoros, Gabon, Ghana and South Africa; while it decreased by less than 20 percent in Mozambique and Kenya; and increased by 42 percent in Rwanda. Similarly, in countries such as South Africa, Gabon, Mali and Senegal, the extent of reduction in national inequality was significant, while in Rwanda, Chad, Uganda and Mozambique, the figure was relatively small.

The findings show that, with the exception of a few countries, spatial and national inequalities in access to basic services have decreased over time.

However, the level of inequality and the extent of the changes in inequality over time vary considerably across countries. Detailed research needs to be undertaken within each country context to understand the level and changes in that country’s inequality. ACEIR is undertaking a detailed country level analysis in South Africa, Ghana and Kenya. 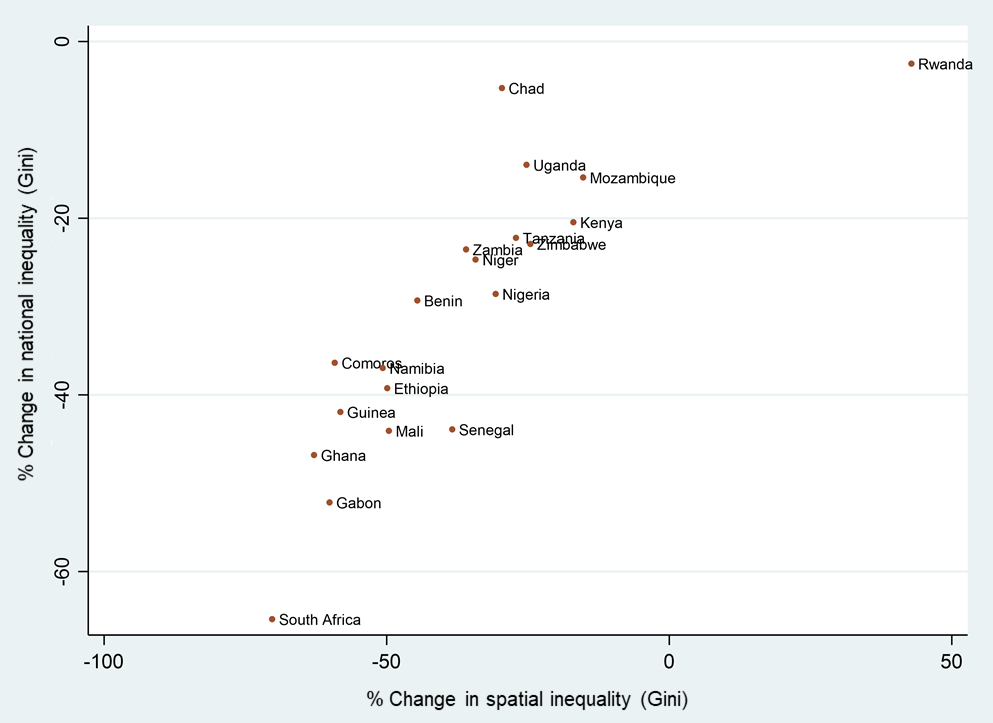 This article draws on research by Muna Shifa and Murray Leibbrandt.

How can we act on inequalities in South Africa?
26th Feb 2020