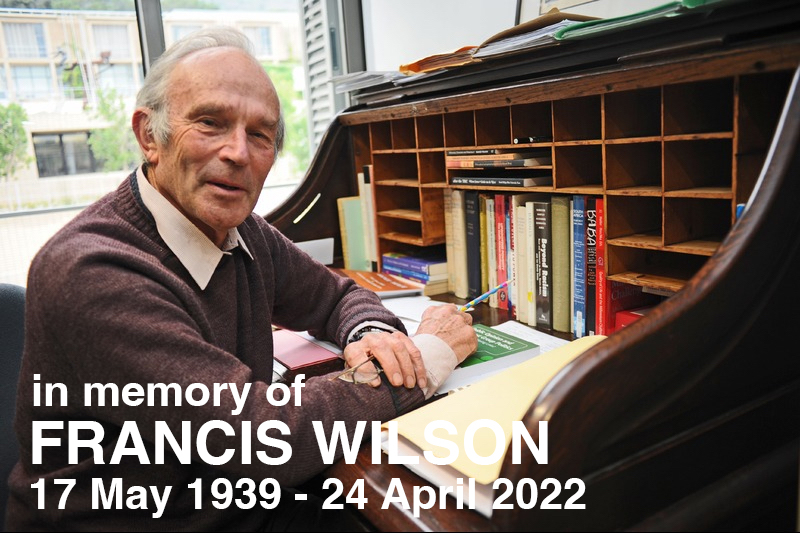 Professor Francis Wilson passed away on the evening of 24 April 2022 in Cape Town at the age of 82. His family had been with him through the day. As his beloved wife Lindy has said, “It is both incredibly sad but also a release for him at last after a very difficult year and a half.”

We all draw comfort from Lindy’s words. At the same time, we in SALDRU are experiencing a huge loss at the passing of this absolutely unique and wonderful man. It is clear from the tributes that have poured in from SALDRU’s extended family at UCT, nationally and internationally, that many are feeling the same way.

Francis was the founding Director of SALDRU in 1975 and remained as our Director until 2001. He was based in SALDRU right up until his passing, completely unmoved by a few official “retirements” along the way. He was a remarkable institution builder and many have commented over the years on his founding and forging of SALDRU in this regard. But institutions are only as good and enduring as the people who lead them and work in them. Francis’ unique way was to motivate and inspire us, one unforgettable, personal conversation and engagement at a time. It is clear from many tributes that have poured in that there are so many who have been similarly inspired and their life courses oriented by Francis, even by one conversation in passing. We have had the special privilege of living with Francis and, over many years, he has inspired, re-inspired and re-oriented all of us in SALDRU. For many, he is the reason that we became Saldrupians and our anchor through our careers.

Alongside his empathy and way with people, in building SALDRU Francis brought genuine research leadership. As he began to build SALDRU he had established himself already as a very talented applied economist and social scientist, directing his talents to documenting and explaining the society in which he lived, and doing so with an unshakeable commitment to social justice. He forged SALDRU out of his belief that he and those working with him in SALDRU had a distinctive and important role to play in bringing our research skills to the service of building a better society.

For Francis this combination of missionary zeal and confidence about the prevailing realities gave him the strength and bravery to say what needed to be said to whoever needed to hear it. He did not shirk from strengthening this voice by taking the lead in convening major national initiatives that brought together similarly committed academics, civil society groups and ordinary people. In this way, with his unique combination of inspiration and perspiration, Francis had huge influence for good; a towering public intellectual of our age in the very best senses of this expression.

This missionary mix of heart and science, and hard heads and soft hearts, still drives each of us who work within SALDRU. It is an inheritance from Francis. This is not taken away by his passing. His spirit lives in the pores of a unit that “strives for academic excellence and policy relevance”.

For those of you who would like to savour a little of Francis at this time, we recommend an interview with Francis captured in 2017 in which he talks about SALDRU from its origins and beyond.

SALDRU will have much more to say in celebrating Francis over the next while, including in our May newsletter.

We are also compiling a tribute to Francis from the many people who knew and loved him. Please send any contributions that you wish to make to murray.leibbrandt@uct.ac.za.

* Francis’ funeral will be held at 09.30am on Monday 2 May at St George’s Cathedral in Cape Town.

Rising to the challenge: tackling poverty and inequality
5th Feb 2018