Every year, June 16th commemorates the Soweto Youth Uprisings of 1976 – protests that began as mobilisation among black students against the compulsory use of Afrikaans as a medium of instruction in schools, and that would spread across the country as a broad uprising against the discriminatory apartheid regime. Hundreds of young people were killed by the regime, in its attempt to suppress the protest. When the new, democratically elected government took its place in 1994, June 16th was declared Youth Day – an annual recognition of young people’s contribution to the struggle for liberation.

This year marks the 46th anniversary of the 1976 uprisings, and Youth Day was organised around the theme “Promoting sustainable livelihoods and resilience of young people, for a better tomorrow”. Government also released a call to action to young people, asking them to “Forge resilience and pursue opportunities for a sustainable livelihood, today and in the future” (South African Government 2022).

Given the context of continuously high levels of poverty, youth unemployment and youth exclusion, it is perhaps a useful exercise to ask what would be understood as “resilience” and how government, and society at large, would expect young people to forge, and express this.

We would argue that these statements are overly simplifying of the position of young people – both those who fall into the unemployed category and NEET, and fail to recognise the endless attempts of many of these young people to reconnect to either the education system or the labour market. These attempts show how young people already draw on their resilience and agency to continue to look for opportunities, and very clearly indicate the need to support them in doing so.

Indeed, using QLFS data, analyses of the characteristics of this large group of NEET youth has clearly indicated that the majority of these young people are not disengaged and would, in fact, prefer to be employed.

Image 1: proportion of young people who are NEET and want to work, versus those who are inactive 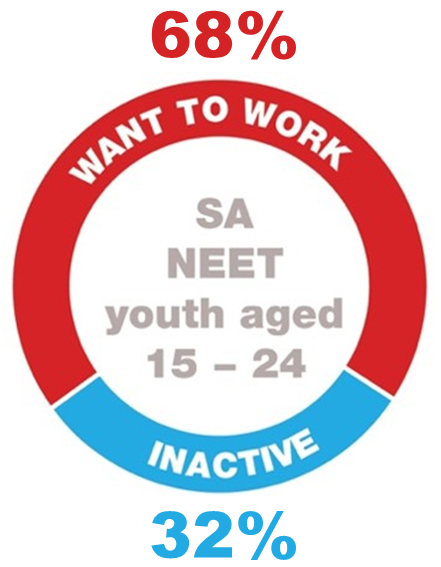 The majority of these young NEETs are unemployed (searching or discouraged) and they have less than, or only, a matric or matric equivalent. The data show that most of the unemployed youth want to work: 44% in this age group are seeking work, while another 24% indicate that they want to work but have become discouraged and have stopped looking.

However, most (50%) of the NEET youth who want to work (i.e., ‘engaged’ in the labour market) are long-term unemployed: they have been searching for work for more than a year. This indicates the risk of scarring from long-term exclusion from work opportunities while wanting to work and underpins the urgency of finding ways to support these young people in their search for (re)connection.

In addition, long-term and extensive qualitative research has documented the seesaw-like movements of young people in and out of states of discouragement, search for work, search for re-entry to education or training, unemployment and back to discouragement (Baldry et al., 2019). It is a relentless process of searching for and pursuing opportunities, in a context of high levels of poverty that often render it almost impossible to continue this search. Previous research has, for instance, also indicated how prohibitive the cost of transport and data is, in young people’s search for opportunities and even their ability to hold on to work. The recently released documentary I’ve been trying. 8 years without a job powerfully captures these lived experiences of, and the high levels of anxiety and despair among, NEET youth who continue to search for reconnection to jobs or other opportunities.

To deny this complexity of the situation millions of young people find themselves in today, hinders our ability to properly understand where, when and how we could actively reach out to these youth to support them in their agency and resilience and to help them reconnect to learning or earning opportunities.

A growing understanding of this complexity is reflected in the dedicated work currently undertaken to build a more comprehensive, cohesive and carefully considered approach to youth unemployment and exclusion, in the form of the Presidential Youth Employment Intervention (PYEI). The PYEI aims to better support young people through their pathways from learning to earning, and therefore “brings together the strengths of numerous government institutions and social partners to deliver more opportunities for young people. It seeks to coordinate, accelerate and enhance existing programmes. The PYEI also drives innovation and creates pathways to earning for young people at scale”. (Stateofthenation.gov.za)

Whether the Intervention will be able to meet its goal and reach and support sufficient numbers of young people who are NEET, in a relatively short amount of time, remains to be seen. Progress on its deliverables can be followed on the newly released dashboard: https://www.stateofthenation.gov.za/presidential-youth-employment-intervention/tracking-progress-and-facilitate-learning

Baldry et al. 2019. The agency and resilience of NEET youth and what we can do to support them. Evidence from a synthesis of qualitative research with young people in South Africa. SALDRU working paper 253. Cape Town: Southern Africa Labour and Development Research Unit, University of Cape Town.

Who are the young people that the BPS is designed for?
19th Sep 2019