In microeconomics, people and households are key units of analysis making it important that they sensibly relate to each other in the data with which they are studied. Although most Statistics South Africa household surveys are designed to be simultaneously representative of people and households, post-survey calibration of the survey weights has undermined this and rendered the data only representative of either the household or the person universe at a time.

This reduction in representativeness needlessly curtails the number of questions the data can be used to answer in a conceptually coherent way. Much work has already been done on reconciling the person and household unit using cross-entropy estimation to reweight South African survey data, specifically, the October Household Surveys and the (Quarterly) Labour Force Surveys. This paper extends this work by focusing on achieving accurate total counts of both people and households at the same time in a reweighting exercise, where previous work mainly focused on the former. Accurate household counts are foundational to most questions asked of household survey data insomuch as the analysis should happen within a universe consistent with what the actual population looks like. Person and household counts are the two statistics most fundamental to staking out the shape of this universe by explicitly pegging the data to (what we know about) the true population. The reweighting in this work is carried out on a stacked series of cross-sections from the October Household Survey (1995-1999) and the General Household Survey (2002-2017). 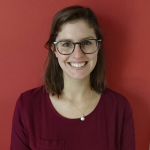 Amy Thornton is a second year PhD student at the School of Economics at UCT being supervised by Prof. Martin Wittenberg. Her research is on the topic of household formation in South Africa. She is also currently working at the Development Policy Research Unit (DPRU) with Prof. Haroon Bhorat, mainly on topics around labour economics.